Last weekend I was lucky enough to travel all the way from Devon up to Skipton for the fibre festival known as Yarndale. This was the first year for the show and judging from the number of excited crafters in attendance it will not be the last! 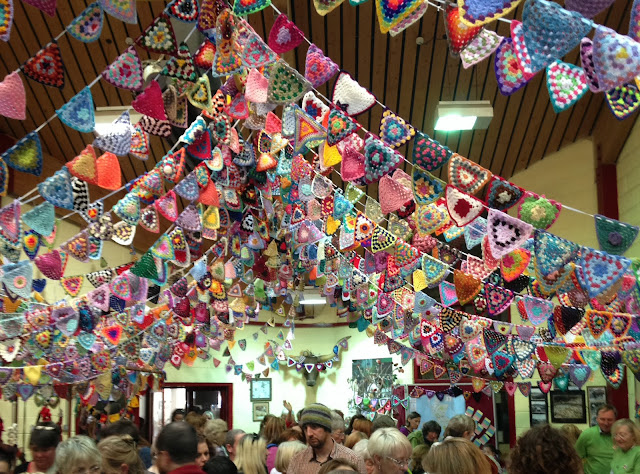 The show ran on both Saturday 28th and Sunday 29th in a most unusual display of late September sunshine!

There were 161 stalls - I went on both days and I still didn't get to see all of them as it was so busy! Entry fees were very reasonable as were stall rentals. This was calculated deliberately to encourage the smaller companies and individuals and it made for a startling array of materials such as hand dyed yarns and roving from various animal and plant fibres plus beautifully crafted equipment for a range of crafts such as knitting, spinning, dying, weaving, braiding and of course crochet! There were also many exhibitors selling handmade clothing, accessories, jewellery and more - usually relating in some way to yarn, plus many clever entrepreneurs like Rose Cottage Crafts and Catchee Monkey who had created their own ranges of craft kits or workshops.

In the centre of it all I found a little slice of Attic24. A knit and natter lounge had been set up with sofas and chairs, artfully draped with Lucy's very own creations to make us feel at home. It was wonderful to see them close up in person. Marooned on this colourful island, Lucy stood firm, smiling and chatting with a sea of delighted fans swirling about her. I don't know how she found the energy for it all. Of course I had to meet her myself. I am one of her many fans as it was her blog (suggested to me by my wonderfully creative Auntie Linda), which got me started on my hooky journey in 2011. It was great to meet her face to face and be able to tell her what an inspiration she has been to me. I wasn't disappointed, she is just as lovely as her blog would suggest and had time for everyone who approached her.

A separate area had been set aside for workshops on all manner of subjects. These were available to book ahead of the show, or, places permitting, on the day. One of my instagram pals A Bunch of Buttons attended one of the courses and her thoughts on this make for a great read. She was so busy that we didn't get a chance to meet up before she headed home. Next time maybe!

The entrance hall was festooned with miles of hand crocheted bunting flags - over 6000 in total from crocheters all over the world. It was such an amazing spectacle to see on arrival.

On the Saturday there was an Instagram meetup arranged at lunchtime and I approached the knit and natter lounge feeling much apprehension. I needn't have worried as they were all such a lovely friendly bunch! We were all so excited to be sitting in the same room as the great Lucy, full of chatter about the day so far and we all agreed that we would all be trying to make it for next year!

There was a big, red London bus by the name of Jean who took me into town to visit Lucy and Tracy's studio. Tracy of the Patchwork Chicken greeted me and showed me around. What a lovely space they have. So light and pretty with such beautiful accessories and items on display.

I walked down through the park up to the canal where there was a final yarny treat for us! The Yarndale team had created a host of yarn bombs which they had tied to trees, railings, lamp posts and more, throughout the park. My favourite was the rows of ducks on the lock by the canal. Just after I snapped this two things happened simultaneously - my phone battery finally died just as a flotilla of real ducks swam right by the yarn bomb which would have made for the best photo ever! 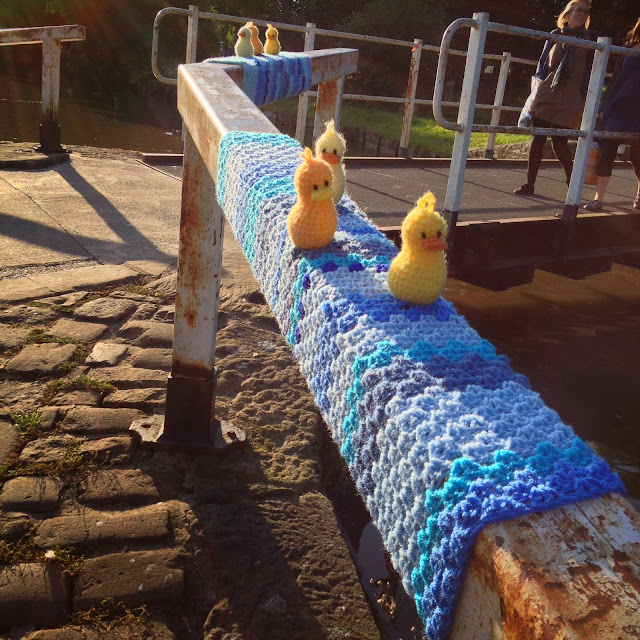 Of course, I spent way too much money, but it was worth the second mortgage to meet such great makers and artisans which I wouldn't normally get the chance to do when buying online or shopping for more conventional materials. I got some new things to try too! Tunisian crochet hooks, a peg loom, t-shirt yarn, jute twine and some really posh Merino yarns from For the Love of Yarn and which are going to look and feel fantastic once I work out what I am going to make with them!

As you can see from this massive and enthusiastic post, I loved every minute of Yarndale and can't wait for next year!